A Con By Psychos, For Psychos: A Review of Adam Cesare's The Con Season

I swear I'll get back to posting some other content here soon, but for now, I have another new review for you. This time up: Adam Cesare's latest, The Con Season. 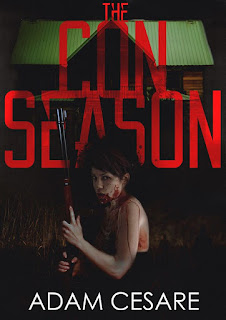 I've known about this one for a little while, as it was one of the latest round of potentials in the Kindle Scout program (and one that I did nominate, to be fair), but after it missed its chance there, Cesare decided to go ahead and put it out himself. For that, I thank him.

The "Con" in the title refers to "conventions," a staple for any horror fan or for anyone who works in the horror field. Clarissa Lane is one of the later, She may have seen her glory days pass her by, but she's still out there, doing what she can all while fighting the effects that years of show business and the natural worries of aging are having on her. After well-meaning mismanagement leaves her dead broke, she ends up accepting an offer to be the Guest of Honor at a newly-launched horror convention that promises to be the most interactive experience fans could ever hope for.

As a huge fan of eighties slasher movies, I can definitely see how heavily they inspired this story, which is best described as a mash-up between Friday the 13th and My Name is Bruce. Without giving too much away, while the majority of the characters fit neatly into the roles you'd expect them to, it's this very sense of familiarity that makes the story so fun to start with. And while they don't all get that much "screen time", with only a couple of exceptions they're explored enough that you still find something to attach yourself to in them.

The villains here also feel all-too real in today's celebrity-obsessed culture, and I had to wonder at times if Cesare hadn't heard of something like this actually happening before, or if maybe his fellow convention-goers might want to keep a closer eye on him in the future. I did find it beautiful that there was no great motivation behind why they did what they did other than they could do it, and had the spare money to waste on doing it. It's quite possibly one of the most realistic motivations I've ever seen for a horror bad guy.

In a move that I personally found both irritating and genius, Cesare doesn't even let you off the hook at the end. While I'm sure he knows what the final outcome was, he leaves it up to the reader to figure out whether it's got the nice PG-13 horror ending, or the brutal and bloody unrated one. I have to wonder how many people who read this will go in either of those directions with it. I picked my ending; and whether it's the same as yours or not doesn't really matter. It adds a touch that makes the story personal to the reader without being overly vague, and I applaud that choice.

All in all, this was a fun, rip-roaring tear that evoked beautiful nostalgia for those bloody slasher days, all while feeling fresh and new. This isn't a story you've seen before, but it feels like one, which for me, was what made it worth the read to start with.

Kindle Scout doesn't know what they were missing.

Get your copy of The Con Season from Amazon here!
John Quick at 9:07 PM
Share