Over the Horizon - Upcoming Event Announcements

December, and the year 2018 with it, are almost over. Now the time begins to look forward to 2019 and beyond! In that spirit, here's a few things you can expect from me in the coming year.

Email ThisBlogThis!Share to TwitterShare to FacebookShare to Pinterest
Labels: A Writer's Life, Cochran Books, Demon at the Window, Project Updates, Publication, Publicity, What Sleeps Beneath, Writing

A Dose of Reality

I'm going to do something that, as a guy, I'm not supposed to do. I'm going to admit that I, like many, many others, suffer from mental illness. Specifically, I deal with Chronic Depression with General Anxiety Disorder.

Let me get this out of the way right up front: I'm not making this post seeking your pity or your sympathy, nor am I doing it to try and increase my sales. Beyond that sentence, I don't intend to mention any of those topics again during this post. I AM doing it to help shine a light on it, and to let people know they're not alone if they are also dealing with it.

Email ThisBlogThis!Share to TwitterShare to FacebookShare to Pinterest
Labels: A Writer's Life, Deep and Personal, Wow That's A Long Post

Storytelling in the Strangest Places

While I was taking a break from writing to get my head straight, one of the things I did to fill my time was catch up on my gaming. Not tabletop, this time, but rather video games. I've been a fan of them for a long, long time, but life prevented me from getting into any good ones lately. Since I had the chance, I decided to try out some of the ones that I'd been hearing lots of good things about. As a result, I found two in particular that really struck me as having some immaculate storytelling that drew me in just as much as any book or movie or television show could.

People have been saying for years that video games are the next generation of immersive home entertainment, perhaps even poised to overtake TV and movies. With storytelling like these two possess, I can definitely see it.

For a horror author, at least one with a similar mindset to my own, there is one event every year that eclipses all others. That event is the Scares That Care Charity Weekend, held for the fifth consecutive year at the Doubletree by Hilton in Williamsburg, VA from August 3-5. Like last year, I went, and since I'm somewhat recovered from it--enough that I can think coherently, at any rate--I figured it was time to recount my experience there, and also to reveal the reasons behind my radio silence for the last few months, and how attending this horror family reunion helped me finish crawling out of a pretty dark place. To make everyone's life easier, I'll save the really personal stuff for the end, so you can skip it if you so choose to.

This was my second time attending Scares That Care, but that didn't mean it felt any less exciting or fun than the first time. Sure, maybe I had more of an idea what to expect this go-around, but that only enhanced my anticipation leading into it. My friend, Joe, who went with me last year, was unable to do so again, but I managed to convince my wife to come along, so I had the added excitement of introducing someone new to the wonderful event that is that convention weekend.

Now for My Next Trick...

Here it is, the official cover reveal for my upcoming novella, DAMNATION TRAIL! 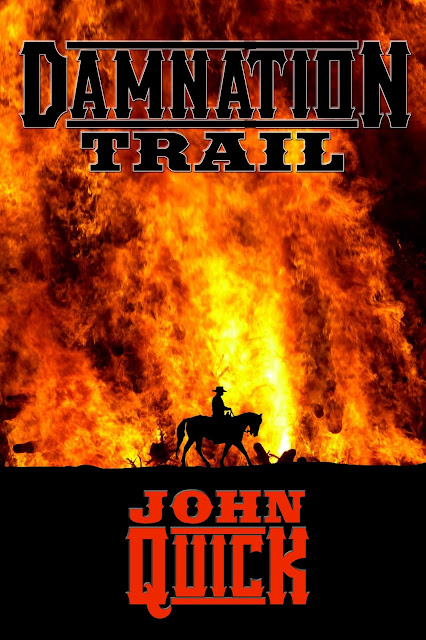 How far would you go for justice?

Came the wanderer to the church that bright Sunday afternoon...

He was looking for a preacher, his hope gone hopeless. His heart was heavy, his soul was burdened, and misery had become his existence. He'd lost all he held dear, and found himself involved in something he couldn't get himself out of.

This is his story, how he came to find himself riding on the DAMNATION TRAIL

Experience a new take on a classic story in a classic setting from the author of THE JOURNAL OF JEREMY TODD and MUDCAT,

The sidebar and Bookshelf links will be up later this afternoon, but digital pre-orders are available now over at Amazon for only $1.99, with a print edition coming when it releases on April 17th! Make sure to check it out, and I hope you enjoy it!

All in the Name of Relaxation

Sometimes you just need to get away, even if it's just for a night. The real fun comes when even your escape refuses to let you free from the stress you were trying to avoid.

I'll explain. As a caution, this is a long post, though I think you'll find it amusing enough. Looking back on it, I certainly do....

A while back, I saw that Brian Keene was going to be at ConNooga in Chattanooga, a pretty easy 2 hour drive for me. I looked at my day job schedule and finances, and found that it was possible for me to go, as long as I went on Sunday, the less expensive of the con's three days, and (at the time) the one day I had off from the day job. Two hours there, spend some time hanging out and such, and then two hours back. A fairly easy day trip.

It's been a busy week for me, and one where I haven't managed to get a lot of actual writing done. That always leaves me feeling out-of-sorts, but sometimes it's just unavoidable. I have made some progress on both SATYR and WARLOCK, as well as knocking out the prologue of my modern-day fairy-tale that will be up after one of those is done. Also, since my brain never seems to shut off, I've been tinkering with other ideas. So, in the interest of helping myself keep things straight, here's what's coming down the pipeline for me in the next few months.

First, I have made arrangements to do some behind the scenes work on books for other folks as well. I won't be going into detail on that because I'm honestly not sure how much I'm allowed to say about it, but once I can announce more, I will.

Second, if you're expecting signed books from me, they ARE coming, I promise. It's been rough finance-wise the last few weeks, and I just had a vehicular emergency to deal with, but I'll be getting those in the mail VERY soon. I am sorry for the delay, but some things just can't be avoided.

Next, as I mentioned, I'm working on two books at once again. This time around, it's easier than the last time I attempted it. I think because it's helping to keep things fresher for me, more fun. I get stuck on one, I switch to the other, and vice-versa. No more trying to hammer my way through when the story's not showing me what's next fast enough. I'm even planning a third project, so all of those should be getting progress updates in the very near future.

Finally, I'm tinkering with an idea. It was originally going to be a feature on this site, but that may be changing to something else. I'll announce it once I have more of an idea what format it's going to take, and exactly how it's going to work.

Also, I have something planned for late spring that I'll be announcing sometime next month, and have a new novel coming from Bloodshot Books near the end of this year or start of next year, so keep an eye out for announcements regarding that as summer crosses into fall. I'm also working on some other things that I hope to have announcements for in the very near future. I may not be very vocal about what I'm doing, but rest assured there is A LOT going on. I just have to wait until there's something to talk about before doing so.

That said, you can make sure to check out my latest appearance on Armand Rosamilia's Arm Cast Podcast by clicking here. He even does a brief review of MUDCAT on the air, which I had no idea was coming when I recorded the interview. It's looking like everyone so far has enjoyed reading that one as much as I enjoyed writing it, so that is an immeasurable relief!

Anyway, back to the grind stone, and keep your eyes peeled for more announcements soon!

Posted by John Quick at 2:16 PM No comments:

Email ThisBlogThis!Share to TwitterShare to FacebookShare to Pinterest
Labels: News, Project Updates, Random Thoughts, The Boring Business End of it All, The Time of Ashes, Writing

Today Was a Good Day

Not one, but TWO cool things happened in the writing world today!

First, I officially signed with Bloodshot Books for the release of WHAT SLEEPS BENEATH, my coming-of-age / vampire novel I wrote for NaNoWriMo in 2016! Watch for it late this year or early next year. To whet your interest, here's the pitch I gave Pete Kahle to get him hooked:

"All Ryan wanted from life was to be cool enough to hook up with the girl of his dreams. If that meant breaking into the town’s abandoned asylum and stealing a memento for the school jerks, so be it. What he didn’t expect was to find a corpse in the basement. An old, withered corpse with a wooden stake in its heart. A stake he knocked free on accident.

When a strange dream prompts him to return, he discovers that sometimes legends and myths are real, and finds himself somehow psychically linked to an actual vampire. It’s the opportunity of a lifetime, and it’s one he can’t even share with his best friend, Hunter.

Then Hunter goes missing, the first in a string of disappearances that rock the small town where Ryan lives. The cause is even more monstrous than his new “friend.” Whatever happens next, Ryan knows his life will never be the same—provided he survives long enough to have a life…"


And to top it off, I discovered this review of MUDCAT by Mallory Heart Reviews over at The Haunted Reading Room! Here's a snippet for you:

"The prologue blew me out of the water {intentional analogy!} with a scene of extreme horror I could never have imagined, then rocketed right on with one intensity after another! ...All this, and CHARACTER EVOLUTION! I absolutely adore MUDCAT!"

All in all, two awesome things in one day! Can't wait to see what tomorrow brings!
Posted by John Quick at 7:19 PM No comments: