Another One Down / Number Nine is Done!

And amidst the hoopla for releasing Consequences, I managed to finish the book that wouldn't freakin' end.

Two weeks in a tropical paradise, all as part of a sociological study, with a payout of $5,000 at the end. For ten participants, it seemed like the perfect way to earn some money and have a nice vacation at the same time. But anything that seems too good to be true probably is, and this study's organizers have something considerably more sinister in mind. The rules keep changing, the exercises the participants are forced to endure more and more bizarre, until everything falls apart and they find themselves in an impossible situation with no escape and nothing less than their very lives on the line. Five grand seems like pennies when your only desire is to survive....

As an aside, this is the first time I've done a book with a meta-plot. I have a loose idea in mind of how it can connect to other things, and possibly be part of a larger world. I guess I'll have to wait and see how it goes, but at least this story's finished.
I'll update the Bookshelf page sometime in the next few days, and get this one printed out and presented to the wife so I can call it officially done. And after that, on to the next!
Posted by John Quick at 2:41 AM No comments:

And so far, so good. Here's the proof:

Needless to say, I'm in a good mood! Here's to many more!

Haven't picked up your own copy yet? What are you waiting for? Use the links on this site and grab one today!
Posted by John Quick at 1:45 AM No comments:

Don't Read Too Much Into It

If you actually noticed, I've pulled The Journal of Jeremy Todd from the "Upcoming Releases" section on the site. That DOES NOT mean it was rejected; I still haven't heard anything one way or the other, and know that Sinister Grin is still wading through the submissions they received during their open submission period. There's still hope for it, but since there's no telling when an answer will come, I went ahead and pulled the notification.

Believe me, I can put it back just as easily if something develops, but right now my focus is on getting the word out about Consequences, so I'll deal with other stuff as it comes.

And if I end up self-pubbing whatever's next, once I make that decision (it's going to be a little while, so don't expect anything soon), I'll update the site with that, too.
Posted by John Quick at 7:04 PM No comments:

Email ThisBlogThis!Share to TwitterShare to FacebookShare to Pinterest
Labels: Project Updates, Publication, The Boring Business End of it All, The Journal of Jeremy Todd

It's official: Consequences is now available as a paperback and eBook. You can use the links in the New Releases section or on the Bookshelf page to get it if you're so inclined.

Getting there was... interesting... to say the least. But at least I learned a few things, so the next time I self-publish a book, I'll have a better idea what to do. Here's a few things I figured out.

All of this can be attributed to it being my first time doing this, so I'm not freaking out about it. It just means that next time, I'll have a better idea of how to do things, and in what order. And even with the issues, it's finally out there. I have fulfilled my dream of getting a book published. I've held it in my hands, and I won't lie, I giggled as I opened the box it shipped in.

So I'm living proof it can be done. I won't say done successfully, because time will be the one to tell on that one, but I pulled it off. If anyone's curious how it was done, here's what I used:

Notice something about that list? It's all freely available. Sure, you can pay at almost every step of the way to get packages and the like, but if you're not afraid to do the work yourself, you can do it at no charge. That said, allocate some money for print proofs, ARCs (Advance Reading Copies), final copies for signing, and some money for postage. Set up a PayPal account to collect payments for signed editions, and it might not be a bad idea to look into pricing for marketing, if you don't know what to do on your own.

Oh, and cross your fingers. Hard work will take you a long way, but it doesn't hurt to have some good breaks along the journey!
Posted by John Quick at 5:34 PM No comments:

Email ThisBlogThis!Share to TwitterShare to FacebookShare to Pinterest
Labels: Consequences, Publication, The Boring Business End of it All, Wow That's A Long Post

A Release Date and a Cover Reveal... 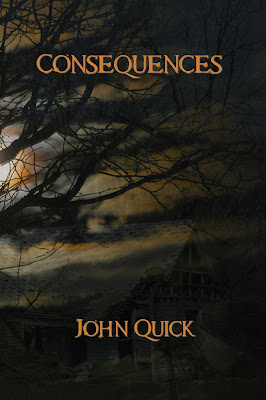 Available as a paperback or an eBook April 19, 2016
Links coming as soon as the sites populate them...