Yesterday, Today, and Tomorrow: 2016 in Review

When I first sat down to write this, I had something completely different in mind for it. It was going to be a long, drawn out thing that really had no bearing on anything, and was ultimately a rehash of things I’ve already said several times before on this blog. So I changed my mind, and decided to do something a little different.
If you want to see what all I was up to this year, just read back over this blog, or check out my posts on Facebook or my tweets on Twitter. The story’s there, if you care to look. Instead of repeating all of that, I’m going to go in a little more personal direction with this year-end wrap up.

See, for most of us, 2016 was a harsh year, a year in which icon after icon fell before our eyes. If only we’d known when Lemmy left us last year, it was Death cracking its knuckles as a warm-up for the events to come. However you voted in November, we now find ourselves in a place we can’t predict, and that’s a little terrifying, too.

See, my goal for the year was to publish a book, with the expectation that I didn’t care if anyone bought it. I met that goal, and wildly exceeded my expectations. 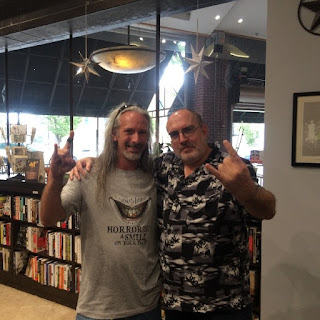 Over the last year, I’ve discovered some incredible authors in the horror genre, both new and old. I’ve read more good books than I can count, and find myself eagerly anticipating more from those folks. And the icing on the cake? I’ve come to know many of them through social media, and feel as though I’ve been welcomed to the cool kids’ table at school. I’ve gotten the chance to meet and talk with some of my influences, and have found them to be more welcoming, open, and kind than I’d ever imagined.

I’ve met some incredible people behind the scenes as well, from Tristan Thorne who was one of the first to help guide me along the path while I was getting CONSEQUENCES out, to publicist, editor, and friend extraordinaire Erin Al-Mehairi, who has taught me more about this business than I ever thought I’d want to know. I’ve gotten the opportunity to banter back and forth with the awesomely kooky and cool (whether she believes it or not) Somer Canon, and have laughed out loud trading insanity with Toneye Eyenot, whose propensity for swapping “I” with “eye” might put some people off, but only served to endear him to me even more. I discovered that Glenn Rolfe has just as much of an admiration for some of the obscure eighties hair metal bands I grew up with as I do. I even got to smile and chuckle a bit as Chuck Buda proclaimed how badly I was kicking everyone’s ass in NaNoWriMo, despite the fact he was right there with me on those word count updates.

I’ve had the opportunity to meet and talk to so many people, from all around the world, people I never would have met had I not decided to walk this insane road called publishing, and I have to say my life is better for it. I’ve shed my share of tears over the course of 2016, just like we all have, but when I look back at it now, I see the joy shining through the clouds.

For me, 2016 was the year I found my calling, for good or for ill. I am going to remember it fondly as I look ahead to what 2017 and beyond will bring.

To everyone who’s reading this, or picked up one of my books, or even just encouraged me to keep going, you have my most heartfelt thanks. To all of you, and everyone else, I hope you have a very happy new year; and as it progresses, may all your dreams come true.

PS: To all those folks who have told me what a machine I am when it comes to writing, I was going to try and prove you wrong by posting my total word count for the year. Once I looked at it, and then looked at it again, then walked away and ran the numbers a third time I decided to simply agree with you instead and leave it at that....
Posted by John Quick at 5:44 PM No comments:

Have a Drink on Me: Three Shots and a Chaser has Escaped!

2016 has been a strange year, both rough and rewarding by turns. Today, in one of those rewarding moments, I am pleased to announce that my second release, a short-story collection called THREE SHOTS AND A CHASER, is now available in both digital AND print editions!

If you’ve read my first work, CONSEQUENCES, you experienced brutal, bloody horror in the style of the old slasher movies from the eighties, only told in my own way. But that’s not all there is to me; this collection demonstrates that quite clearly.

Here, you’re going to find a more subtle horror than I did before, horror not only of sight and sound, but of mind. And if you heard Rod Serling say that line, well, you’re on the right track. See, this time, it’s not Jason or Freddy or Michael or Pinhead that influenced me. Instead, it’s a Twilight Zone, reaching for The Outer Limits, and telling a few Tales from the Darkside.

I’m celebrating, but it’s YOU who gets the reward! In honor of this collection’s release, not only is CONSEQUENCES going on sale, but I’ll be giving a signed copy to one lucky person! So take the chance; if you haven’t read it already, here’s your opportunity to do so. I suggest you read it alongside THREE SHOTS AND A CHASER, see for yourself the range of my creative insanity. I’m curious which one you prefer: fast and bloody, or subtle scares!

Either way, if you enjoy yourself, if you lose an afternoon or two in the worlds I’ve created, then my mission is accomplished. Just don’t lose yourself too much… you’ll want to be back for everything else that’s to come!

Click here to enter the giveaway! (Note: this will take you to Rafflecopter's site, which is where the technical end of this is handled.)

This giveaway will be running through the end of December, so you've got a little time. That said, don't wait too long! And good luck to all who enter!
Posted by John Quick at 11:14 PM No comments:

Today, my short story collection Three Shots and a Chaser found its way onto Kindles everywhere. There's a paperback version coming in the next few days, once I approve the final proof for it, but either way, it meant I needed to do some updating on the website.

To that end, I also ended up doing a serious overhaul on the Bookshelf page. Previously, I listed everything I'd finished at least a first draft of, but as I looked at it today, it occurred to me that it was starting to become a bit hard to keep track of or see the important bits anymore. So, I cleaned it.

Now, it only shows things that are actually released, or are in the pipeline for release, or that have been submitted for possible release. This way, it's going to be much easier for me to keep it current and updated, and when you all want to see what's out there, you'll be able to much, much easier than before.

What happens when my actual release list gets as long as the written list that was already there? Well, I'll cross that bridge when I get to it. But for now, it made my life a little easier.
Posted by John Quick at 3:03 PM No comments: