Jeremy Todd Speaks, and So Do I

A little late sharing this out, but I did an interview with The Gal in the Blue Mask book blog , and it went up a few days ago. As an added bonus, you can also check out a character interview she did with Jeremy Todd, the "author" of THE JOURNAL OF JEREMY TODD! Make sure to give them a look!
Jeremy Todd's interview.
My interview.

Both will be up on the Publicity page very shortly.
Posted by John Quick at 7:11 PM No comments:

The time is coming fast, now: MUDCAT is about to escape into the world. 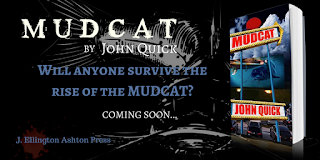 The date is set: December 5, 2017, and you can pre-order it now using the link on the right side of this page! Digital edition will be $3.99, the paperback is TBA (but yes, there will be both)! Stay tuned for updates regarding the promotional tour stops online as they are announced by JEA Press.

Make sure to also keep tabs on their page at http://www.jellingtonashton.com/ for more information as well!

Posted by John Quick at 4:46 PM No comments:

You know what? I love this so much, I'm not even going to build it up first. Without further ado, here's the full print cover for MUDCAT! 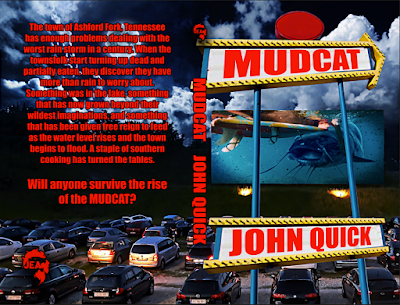 Click the image to make it bigger, so you can enjoy it at full size!

Thanks go out to the appropriately named Michael "Fish" Fisher for his incredible work on this one, and for elevating my "B-Movie" theme into an "A" cover.

Look for it to escape very, very soon!

The Fun of Writing Fantasy

I have two loves when it comes to fiction: horror and fantasy. Just as I've lost myself in a novel by Stephen King or Jack Ketchum, Richard Laymon or Brian Keene, so, too have I gone to other worlds in tales by Robert Jordan, Brandon Sanderson, Patrick Rothfuss, and George R.R. Martin. By extension, I've tried my hand at writing fantasy, too, to mixed results.

One of the first original novels I did was fantasy. I intended for it to be the first of a series, and while I think there were some good bits, most of it was utter garbage that will hopefully never see the light of day--at least not in the form it is now. A few years ago, I tried again. I got through a few chapters, and then I put it down. It just wasn't time.

Then a friend and I came up with a fantasy world for a Dungeons & Dragons game, and something clicked. I picked that in-progress novel back up, read over it, and realized it wasn't as bad as I thought at the time. So I went back to work on it. And finished it. And then finished the second book in what will probably be a trilogy called The Time of Ashes Cycle.

Here's the problem: I'm a pantser by nature. That means I have a story idea and start writing. I don't plan things out, I don't think very far ahead, I just let the characters and story pull me along. Fantasy, due to the intricacies inherent in the genre, doesn't work well with pantsers. Therefore, I've had to do a hybrid plotter / pantser thing that I am totally not used to.

Email ThisBlogThis!Share to TwitterShare to FacebookShare to Pinterest
Labels: A Writer's Life, The Boring Business End of it All, The Time of Ashes, Writing
Newer Posts Older Posts Home
Subscribe to: Posts (Atom)