I love short stories, but for some reason, I've never been able to write them. It was as though the ideas and concepts that I came up with were too broad in scope, and didn't lend themselves to shorter works. For years, I tried without success to write something small that still made an impact, with little success.

For some reason, this month that all changed. Along with working on my current novel, I've managed to hammer out some short stories as well. You won't see those on the progress meter, since they come and go so fast (by their very nature, I suppose), but I have updated the Bookshelf page to add the short fiction I've managed to finish.

Do I have enough to consider a collection? Hardly, nor would I right out of the gate. But there are anthologies looking for submissions all the time, and now I can finally start looking at those in addition to the longer stuff I'm doing.

So if you're curious, feel free to check it out. And if anything happens with any of them, I'll be sure to let you know. I'm just happy I seem to have overcome that particular block so I can have a broader range of outlets for the sometimes nutty ideas that come to mind!
Posted by John Quick at 1:57 PM No comments:

The Ink is Drying...

...and so I'm thrilled to announce that The Journal of Jeremy Todd has officially been picked up by Sinister Grin Press for release in 2017!

I don't have specifics on a release date or anything like that; it's still exceptionally early in the game. But you can rest assured I'll be providing that information as soon as I have it.

I think it's safe to say I'm overjoyed to have my name alongside influences of mine like Kristopher Rufty, Jonathan Janz, and Ron Kelly, not to mention some of the awesome writers I've discovered through them like Michelle Garza and Melissa Lason, David Bernstein, and Brett McBean.

Thanks to Tristan, Matt, Travis, and the rest of the SGP crew for taking a chance on me, and I look forward to working with you!
Posted by John Quick at 3:17 PM No comments:

Email ThisBlogThis!Share to TwitterShare to FacebookShare to Pinterest
Labels: Publication, The Boring Business End of it All, The Journal of Jeremy Todd

I haven't actually done a book review on here in a while, so I think maybe it's time. And what a tale to break back into it with!

Full disclosure: I was given a pre-release copy of this, but that in no way affects this review.

I'd heard the names Michelle Garza and Melissa Lason before, but unfortunately hadn't had the privilege of reading any of their work until I got a hold of Mayan Blue, their first novel-length story coming May 25 from Sinister Grin Press. I knew they'd been given the appellation "The Sisters of Slaughter", but for some reason I still wasn't sure what to expect.

I definitely understand the nickname now. 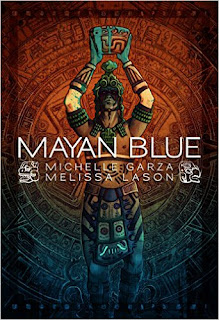 Once the action begins, not far into the book, it just doesn't let up. These two show no quarter dragging the characters--and by extension, the reader--into the depths of the Mayan version of Hell. There's a vividness to the scenes they craft that made me want to make sure I was reading in full daylight, or at least with most of the lights on. Before long, I could swear I smelled the rot and decay, and  kept remembering the old tagline for Last House on the Left, only modified for the format: it's only a story, it's only a story....

That they researched their subject matter fully is without question. The degree to which they brought this dead culture's beliefs and rituals to life was uncanny. Every writer worth their salt does research; it's just part of the crafting process, if you want to do it right. But there's a balance between using that research to flavor your story and using it to bludgeon your readers over the head with all the cool stuff you learned. These two have found that balance, and when they bludgeon you, it's with the story, not the background. That takes skill, and you'll find it here in abundance.

I'd love to go into more detail, but I'd rather keep this journey fresh and this review spoiler-free for anyone who picks it up. And I can't recommend enough that you do so. For the record: grab it in paperback once it's available. The wrap-around cover is one of the most beautiful I've seen in a very long time, if not THE most beautiful. Hell, buy two: one to read, one so you can frame the cover. It's that good.

This may have been my first exposure to the Sisters, but I'm positive it won't be my last. And if Mayan Blue is anything to gauge it from, I doubt I'll be disappointed!

Grab it from Amazon here. You will NOT regret it!
Posted by John Quick at 1:56 AM No comments:

Looking at the Numbers

Consequences has been out for a while, and while my sales figures aren't all that high (not unexpected since the only real marketing push I've given it has been through social media and on this site), I'm starting to see a trend here that's got me thinking about how to release and distribute anything in the future.

When I released it, I did the paperback through CreateSpace (owned by Amazon), and digital versions through both Kindle Direct Publishing and Draft 2 Digital, which put me in Apple iBooks, Barnes and Noble nook, and Kobo. Over the last couple of weeks, something interesting has emerged from the sales reports about that, though.

I've pushed the links for everything; why leave anything out, right? What I'm seeing is this:


Now when I say dead last, let me clarify that: I've sold two copies in .epub format. One in iBooks, one on Kobo.

And yes, I know most of what I've sold so far have been "friends and family" sales, but still, even among that small group the results are becoming pretty clear.

Amazon is dominating the market. Makes sense, actually: I own a nook, and I run the Kindle for Android app on it. Kindle has their Unlimited program where you can read for free if you're a part of it (the author gets royalties based on page views), but it requires exclusivity to Amazon for distribution to be part of it. Which means I'm not.

So I'm thinking. Yeah, I picked up two sales I wouldn't have gotten otherwise, but how many potential page views from KU am I missing out on? I'm a new author in this field, after all, and I'm sure there's folks out there who would rather take a free chance for them (and I still get paid, albeit less than a purchase) than to fork over money on something they're not sure they'll like.

So is it even worth it to release to the other outlets?

I'm working on getting some more reviews and publicity to push Consequences, really try to reach a wider potential reader base, so I'm not carving anything in stone yet. But the odds aren't looking good for .epubs.

The digital book world may truly belong to Amazon now.
Posted by John Quick at 10:44 PM No comments: