Let me go ahead and get something out of the way right up front: this is going to be different from what I normally do with my reviews, but this is how inspiration works, so bear with me. I’m going to be talking about Jonathan Janz’s novella Witching Hour Theatre, which has just been re-released with some additional content and an essay for the afterword where he talks about some of his influences, his early writing development, Stephen King, and his wife. Since I’m one of those people who read books cover to cover, I read the essay as well, and realized that if I did this, it would be a review in two parts. For part one, I’m wearing my reader hat, and will talk about the story itself. For part two, I’m going to switch perspectives and put on my writer’s hat, and comment on the essay itself. If you’re just curious what I thought about the book, feel free to skip part two, but this was what I was inspired to say, so that’s how I’m compelled to do it.

First, the story itself. 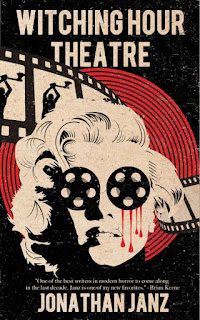 Witching Hour Theatre is a story about Larry Wilson, a horror fan with low self-esteem who spends three nights a week at the local cinema, where they show a triple bill of horror movies at midnight on Mondays, Wednesdays, and Fridays. There’s a lot of inner monologue here, which is considerably more compelling than you might think at first glance. We get to know Larry well as he goes through the ritual of buying his ticket, getting his snacks, and settling into the experience the movies provide. The problem is that there’s real horror in the theater, and Larry’s real life gets more and more stressful and adventurous as the flickering images on the screen progress.

I enjoyed the interplay between Larry and the other recurring patrons, their shared bond forged by a love of horror movies—the worse, the better, in some cases. It is very true to what I’ve witnessed myself among the horror community and made the world that much more believable. Also, his interactions with Nichole, the girl at the concession stand, were brilliant, and reminded me of the time when I was single and would find a girl I liked and the trepidation that sometimes ensued when attempting to follow through with those feelings. How it all came together at the end was well-done, and had me on the edge of my seat as the third act—and even the epilogue—scrolled across my Kindle.

There’s some rough edges here, but as the foreword states, this was by design. This is a story from the very start of Janz’s career, and rather than rewrite it with all the knowledge and skill he’s gained since then, he chose to keep it the way it was. This turns out to be a brilliant decision, and one I’m sure was not reached lightly. The end result is seeing what makes a story good; namely, the story. Also, as a fan of Janz’s other works, it was interesting to see his growth in such clear-cut terms. This was by no means bad, and I don’t mean to imply otherwise. It’s just interesting to see, especially being a writer myself.

All in all, definitely pick this one up. It’s a fast read, but it more than achieved the goal of entertaining me for a while, and also had me smiling after I’d closed it when I thought back to the bits that I really liked.

You can grab a copy for yourself here.

And now, let me switch hats and talk a little about the essay and what I got from it as a writer.

While I’ll be the first to admit I’m still a babe in the woods when it comes to this whole “being a published writer” thing, I’ve still managed to come to several realizations since I started that no one tells you about when you first dip your toes into these waters. Primary among those discoveries was that there is a lot of self-doubt that comes along with it. Some people tend to think writers are needy, and constantly seeking some kind of validation, and there’s some truth to that, but it’s also been said that this is a lonely profession at times, and that is also true. When you sit down to write a story, it’s just you and the blank page before you—that’s it. So it’s natural to want someone to tell you that what you’re doing is worthwhile. It doesn’t even have to be direct encouragement; sometimes all it takes is to know that you’re not the only one who’s gone through this, and that it’s completely normal and natural to feel this way, no matter what stage of the game you’re in.

In the essay Janz includes as the afterword to Witching Hour Theatre, amusingly called “My Wife, Stephen King, and Witching Hour Theatre” (which he stresses should not be taken to mean that his wife is Stephen King), he talks about his influences and how he’s absorbed and analyzed them, his burgeoning desire to be a writer and the path he took to get where he is, and how his wife has supported him beyond all measure in his drive to see his work in print. He is open and candid as he discusses these topics, and whether it was his intent or not, it was this approach that made it feel as though he was speaking directly to me as I read it.

See, as it turns out, Jonathan Janz has experienced that same self-doubt. He is familiar with that feeling of nervousness and yes, sheer terror that accompanies handing a story you’ve just spent however long creating to someone—anyone—else and you wait to see if they tell you that you’ve created something worthwhile or that what you’ve typed up is best served lining a waste can. He has felt that frustration as you try to find your own unique voice and move past pale imitation of those other writers who’ve influenced and inspired you to try it yourself. For him, much of this is years in the past; for me, it’s considerably more recent.

Which is why it means so much to read this. While I’ve never had the pleasure of meeting Jonathan Janz, or talking with him at length about this sometimes insane path we’re walking, he still reached out and patted me on the back and said “it’s okay, this is normal, we all feel this way, just keep pushing.” To me, this is what makes someone an influence, and a sure sign of someone who will leave a lasting impact on those who follow in his footsteps. As proof of this, there are only two others who managed the same feat through the written word alone: Stephen King, with On Writing, and Richard Laymon, with A Writer’s Tale.

I can’t say that Jonathan Janz is my biggest influence; that honor, as with many writers of my generation and before, belongs to “Uncle Steve”. But I can say that Janz has cemented himself among my stronger influences, and I can only hope to prove myself worthy of that one day.

His name is Jonathan Janz.
Posted by John Quick at 12:45 PM