Rise of the B-Novels? - A Review of The Sludge by David Bernstein

The second I saw the cover for this one, I knew I wanted to read it, so without further ado, here's my review of David Bernstein's The Sludge.

Note: I received a copy of this in exchange for an honest review, but that in no way affected my thoughts on it. 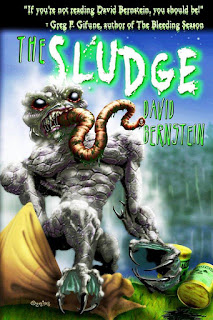 When I first saw the cover to David Bernstein’s newest, The Sludge, I was immediately transported back to the late eighties, browsing the shelves at the local video store, smiling at the covers for all those B-movies that were my main source of horror sustenance at the time. I’d made it through the classics, the slasher fare, and even some stuff that could be barely be called horror. But it was the B-movies that always pulled me back time and again. Needless to say, I was excited for this one, but I was also afraid that once my expectations were set, I’d end up disappointed.

I shouldn’t have worried.

From the first chapter, where toxic waste gets illegally dumped into a remote lake, I knew I was in for one of those B-movie rides that I couldn’t get enough of. Bernstein writes with a visual flair that made everything play out on the silver screen in my head, even down to the grain that seemed to always drift through those types of movies.

Even the characters were right out of a B-movie, from the bank-robbing brothers to the four young adults out for a hike in the woods. When the monster makes its appearance, the description was straight out of a Troma movie, which, for me, just added to the enjoyment.

Being a novella, there’s not a lot of page real estate with which to build and tell the story, but Bernstein does an admirable job of it nonetheless. One or two scenes felt a bit rushed, and the way the relationship between the brothers is built up may seem to go on a little longer than is absolutely necessary, but even this adds to the low-budget feel that made the story so enjoyable in the first place.

If you want a throw-back to those wonderful B-movies from the eighties, without any of the descent into pure camp that sometimes accompanied them, The Sludge reads like a love letter to them, all while standing on its own merits as well. If you’ve never read his work, this is a wonderful sampler to start with. If you have read something else he’s done, you already know what you’re in for: a fun romp into darkness. Just watch out for the buckets of fake blood that might get thrown your way from off-camera.

You can get a copy of The Sludge from Amazon here.
Posted by John Quick at 11:00 PM