Serving Up The Hard Questions: A Review of Vicki Beautiful

In case you haven't noticed, I've been trying to catch up on my "To Read" pile in the last few weeks, and there's just been so much good stuff in there I've felt compelled to share it with anyone who cares to listen (or read, as the case may be). To that end, here's my review of Somer Canon's debut novella, Vicki Beautiful. 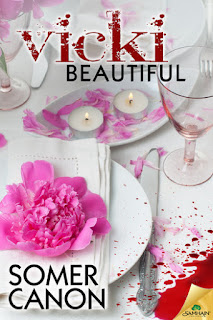 We’ve all had friends we claimed we’d help hide a body before. It’s one of those clichés that never seems to go away, no matter what else changes from generation to generation. But when the chips are down, how far are we really willing to go for those friends? Maybe we really would help them move a body, but what if the request is of a more… personal nature?

This is the question at the center of Somer Canon’s debut novella Vicki Beautiful, and it’s one that I found myself thinking about long after I’d finished it. It’s the eponymous Vicki’s fortieth birthday, and her two lifelong friends have arrived for dinner and drinks and a night of celebration. But there’s a dark cloud hanging over the night: the cancer everyone thought Vicki had beaten has returned, so this is a celebration of her final birthday, not just the big 4-0. By morning, Vicki is gone, and her last request sends her friends on a slow spiral into pure, unadulterated madness.

More than that, I don’t want to say. That would be giving it away, and this is definitely something you want to experience for yourself to get the full impact. Suffice it to say, Vicki asks something of her friends that I don’t know if I could comply with, were I in their shoes. It’s been nearly two weeks since I finished Vicki Beautiful, and I still don’t know what I would do with that request.

And that, to me, is the core of what elevates something above its genre and turns it into unquestionable art: I left the book, but it didn’t leave me. That question’s the story poses has been gnawing at me ever since it was first revealed. More telling, it’s a question I found myself seriously considering. I’m a person who’s impatiently patient; if a question comes up, I want the answer as soon as possible, and will allocate a lot of brain power to coming up with that answer. That it’s taken this long and I don’t have one says that what on the surface seems to be a simple—if twisted—premise ended up being much, much more than that.

Beyond the lingering effect, the story is well-crafted. The relationship between the three friends leaps off the pages, and is instantly believable. Their reactions are likewise authentic, and uncertain, just as I’m sure mine would be in that same situation. Make no mistake, though: this is not some fluffy bunny story here. It is dark, and disturbing, and quite uncomfortable to see unfold. You’ll want to put it down, to try and escape, but you won’t be able to. You’ll have to know what happens next, how far things will go.

The only real complaint I found with the story was the ease in which the main characters were able to get the outside help they needed to pull off Vicki’s final wish. Granted, the given motivation of lots of money does, unfortunately, seem all to possible in this day and age, but considering the distaste one notable supporting character shows to what they’ve been asked to do, it still seems just a bit implausible. That said, it’s only one relatively small and minor part of the much bigger and exceptional whole that makes up this strange morality play.

After reading some of Somer Canon’s tweets, I knew she was my kind of twisted. After reading this, I know it without a doubt. Vicki Beautiful is… well, beautifully done. I cannot wait to see what this “mini-van revving soccer mom” serves up next; I just hope she’s not offended if I think twice before I eat it.

You can grab a copy of Vicki Beautiful from Amazon here.
Posted by John Quick at 11:42 PM