Another Reason to Stay Out of the Woods: A Review of Glenn Rolfe's Chasing Ghosts

I seem to be getting into a routine with reviews now, and have another fun one for you all: Glenn Rolfe's latest novella from Sinister Grin, Chasing Ghosts. Thanks to both Glenn and Erin over at Hook of a Book for including me on the publicity tour for this one, and for providing a copy of this in exchange for my honest opinion on it! 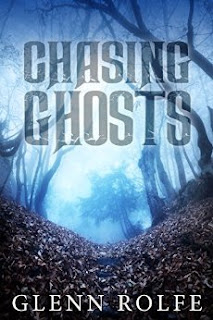 When I stop and think that a year ago I had only seen Glenn Rolfe’s name on a couple of books on the Samhain Horror website, I wish I’d taken a chance sooner. Now that I’ve managed to dig into his works, he’s rapidly becoming one of my favorites among the new generation of horror authors. His latest release from Sinister Grin Press, Chasing Ghosts, only helps cement that into place.

I knew I wanted to see what it was all about the second I saw that cover: it manages to be haunting without giving anything away for the plot, leaving the story as a blissful surprise.

Okay, so blissful is probably a bad word choice. Chasing Ghosts is a blistering, mile-a-minute ride into fear, desperation, and depravity.  Three boys out snooping in abandoned houses; a cheating husband and his devastated wife mourning the disappearance of their child; the husband’s mistress and the couple’s best friend; and a rock band playing a strange gig in a cabin in the woods.  These are the major players here, and as their paths begin to collide, they all learn there’s someone else out there, maybe several someones, folks who the town thought had vanished years ago.

I love the way Rolfe writes about small towns and the people who live in them. It keeps the story cozy and contained, and gives the reader a chance to really build up affection for the folks they’re reading about, even when the story’s not that long. And the people he has living and visiting in this town? Don't even think they're cookie-cutter. Every character on the pages is flawed in some way, just like us, all of them trying to make their way through life as best they can, even before they're thrust into the madness that ensues over the course of the tale. These are folks you could've had a beer with down at the local bar, or seen on the stage there, or - if you're not old enough to be going to bars - could've gone to school with. All of them immediately come to life in your mind, which makes the horrors they encounter all the more heart-wrenching as well.

The villains, the notorious Cobb family, are suitably creepy, with a definite throwback to the near-primitive maniacs found in Richard Laymon’s mountain novels or Jack Ketchum’s cannibalistic ones. Rolfe mentions both in his dedication for Chasing Ghosts, and once you read the sequences with these guys, you’ll feel that dedication was well-warranted.

If there’s a complaint to be had here, it’s that we don’t get enough about those villains. You can see the hints of backstory there, but we're only granted small doses of them and still know next to nothing about them when the story reaches its end.  I would have loved to see this be maybe fifty more pages dealing with the monsters, their history and sick motivations. That being said, if those extra pages were there, it would slow the pace considerably, taking away the “pedal to the floor” feel that keeps you turning the pages until there’s no more to turn, so I can respect the balancing act that went into giving us what we needed about them, and keeping the story moving.

Overall, Chasing Ghosts was a fun way to kill a couple of hours, and the hints at a possible prequel (and sequel, maybe?) made me anxious to see what else Glenn has in store for this already troubled little town. Definitely pick up a copy and see for yourself; I promise you won’t be disappointed. 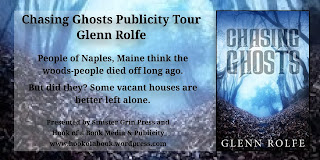 
The Cobbs were ignorant woods-people that died off and left nothing to fear. Locals in Naples, Maine think they know this story. But are they wrong?

Luke Howard and his mom move to Naples and Luke’s eager to make new friends. When Jason and Davey invite him out to the abandoned Cobb place for a game they call “chasing ghosts,” he’s ready and willing. However, the boys will come to discover that some vacant houses are better left to die alone.
Meanwhile, a punk band set to play in a rented cabin out of town feel eyes upon them. Somebody’s watching, but not their usual audience. When their lead singer strays too far from the group and disappears, his band mates set out in the darkness to find him.
Police Chief Walt Henderson is about to discover that there’s more going on out in the woods of his town than he ever imagined.
Chasing ghosts is more than just some children’s game.
Biography 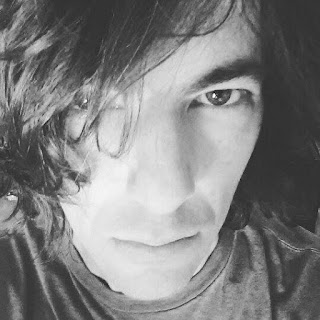 Glenn Rolfe is an author, singer, songwriter and all around fun loving guy from the haunted woods of New England. He has studied Creative Writing at Southern New Hampshire University, and continues his education in the world of horror by devouring the novels of Stephen King, Jack Ketchum, Hunter Shea, Brian Moreland and many others. He and his wife, Meghan, have three children, Ruby, Ramona, and Axl. He is grateful to be loved despite his weirdness.
He is the author the novellas, Abram's Bridge, Boom Town, Things We Fear, and the forthcoming, Chasing Ghosts; the short fiction collection, Slush; and the novels, The Haunted Halls and Blood and Rain.
His first novella collection, Where Nightmares Begin, was released in March 2016.
Praise for Glenn Rolfe
“Things We Fear is a compulsively readable tale of obsession and dark suspense, with one of the creepiest villains I’ve encountered in recent years.” — Tim Waggoner, author of The Way of All Flesh
“Glenn Rolfe’s new thriller is addictive. A quick, compelling read. Rolfe creates tension with a minimal amount of words. His characters are so well-drawn they come alive (before they die).” — Duncan Ralston, author of Salvage

“Fast paced and tense, with one of the most interesting monsters I’ve read about in recent times.” — Patrick Lacey, author of A Debt to Be Paid

“Glenn Rolfe is quickly establishing a name for himself as one of a number of excellent new writers to ensure the horror genre is kept alive and well.” — Catherine Cavendish, author of Dark Avenging Angel
“There is a definite old school feel about this novella (Things We Fear). It isn’t an over the top gore fest. Instead, what we have is a tense, psychological thriller that builds steadily towards a fitting climax.” -Adrian Shotbolt, at Ginger Nuts of Horror
Purchase Links
Amazon
Sinister Grin Press

If you are a member of the media or a blogger that wishes to review Chasing Ghosts or feature Glenn Rolfe, contact Erin Al-Mehairi, publicity and marketing, Sinister Grin Press, at hookofabook(at)hotmail(dot)com.