The Disney Movie That Never Was: A Review of Shane McKenzie's Pretty Pretty Princess

I've got an interesting one for you today. It's by a horror author, but it's not a horror novel. The only way I can think to label it is fantasy fairy tale musical strangeness; but that's not a bad thing. Here's my take on Shane McKenzie's newest, Pretty Pretty Princess. 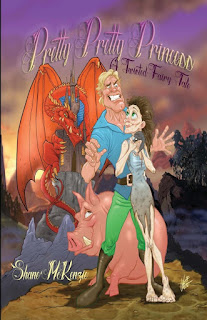 I’ve read Shane McKenzie’s work before, but it’s been either horror or bizzaro. If that’s what you’re expecting, Pretty Pretty Princess, his latest from Blood Bound Books is not either of those, though there are some hints of them here. Instead, it’s a fairy tale, and as the cover says, it’s a twisted one.

Prince Francis was banished from his home for not being “manly” enough for his father. Now he travels the land with his best friend, the talking pig Gavin, spreading word about his movement, the Princes for Ethical Treatment of Princesses (or P.E.T.P for short). See, he’s tired of the kings and queens locking their daughters away in towers and caves and dungeons then sticking monsters outside to guard them in the hopes that some brave knight will come and save them, thereby inheriting both the princess and her kingdom. Francis believes the Princesses should be free to choose for themselves, and wants everyone else to come around to the same way of thinking.

Then he gets himself swept up in one of the very quests he thinks abhorrent, and winds up meeting Pretty, a Princess, who’s undergone the traditional abuse. His hope isn’t that he’ll become her brave knight, but rather that she’ll help him spread the word about his cause, and change the world in the process. Naturally, things don’t exactly go according to plan.

Let’s go ahead and get this out of the way up front: this book does not take itself seriously. If you need any proof of that, you need look no further than Francis’s penchant for falling into a “song trance” where he sings about whatever’s on his mind at the time. And it’s not just him; when a tavern full of brutish soldiers does the same, you immediately see where’s McKenzie’s going with this. And it’s brilliant.

Every fairy tale trope you can imagine is on proud display here, from the Prince who’s too good for his own good, to the snarky animal companion that talks, to the wicked fool of a prince who ends up being the antagonist, to a final battle fought between men, goblins, a dragon, unicorns, flies, rats, and ducks. There were many points where I had to put the Kindle down so I could wipe the tears from my eyes as I laughed at the ridiculousness of it all, and felt safe doing so because I can’t imagine this was being played straight. When your tagline is “Disney on acid”, it’s kind of obvious where you’re going with it.

For all of that, the story is well-told, and the mental movie that played as I read was even animated in keeping with the theme. I don’t know about Disney on acid, but I can definitely see a bunch of disgruntled animators holed up in a room that reeks of pot smoke, hammering this out as a big middle finger to their bosses. And for the record: I would kill to see this as an animated feature one day. Just make sure to watch after the kids are in bed. No need to send them to therapy too soon!

All in all, this is the perfect thing to help you forget about your worries and stresses for a few hours, and left me hoping to see McKenzie do more in this strange style—or even world—sometime in the future!

You can get your own copy of Pretty Pretty Princess in either paperback or eBook from Amazon here!
Posted by John Quick at 2:47 PM