Making Vampires Fun Again: A Review of Hunter of the Dead by Stephen Kozeniewski

As promised, here's the second review for this week; this time, it's the latest from Stephen Kozeniewski, Hunter of the Dead. 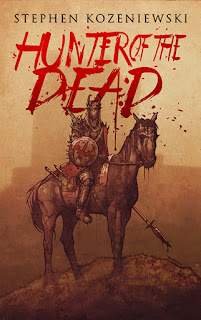 Let’s get something out of the way right up front: after the post-Twilight vampire craze, I was pretty burnt out on vampire fiction. While I know that great improvements and new takes have come out recently (Jonathan Janz’s Dust Devils and Kristopher Rufty’s Vampire of Plainsfield come to mind), it’s just been hard for me to get into anything once I see the “V” word in the description.

I’m pleased to say that Kozeniewski has managed to reverse my thinking on the matter.

We’re thrown in right away, with the prologue introducing us to all the factions we’re going to need to know about later in the story. There’s the vampires, of course, split into thirteen houses that are filled with political intrigue and in-fighting amongst each other; the fixers, who function the way they would for the mob, only they’re undead; the Inquisitors, fighting against the bloodsucking legions; and then the eponymous Hunter of the Dead, who doesn’t seem to much care which of those factions he’s killing so long as doing so fulfills his mysterious purpose.

When the story itself kicks off, playing out over the course of four nights, all of these elements come together in something that’s as filled with fun as it is adventure.

The characters here were well-crafted, from the lone-wolf Inquisitor to his erstwhile apprentice and the parallels with the head of House Cicatrice, most powerful of the vampire lords, and his new get. All of these characters get their moment in the spotlight, and all of them manage to shine. Even the protagonists of the story aren’t typical moustache-twirling bad guys. Like true villains, they all believe that what they’re doing is the right thing, even if their motivations are not exactly pure. The Inquisitors, who you might think should be the heroes here due to their mandate to fight the evil bloodsuckers, aren’t even spared from fault, and make some decisions that end up with decidedly unpleasant consequences for the city of Las Vegas.

There’s a depth and history to the ancient characters, too. There’s a danger when exploring that kind of thing to bog down and become mired in exposition hell, but Kozeniewski manages to avoid that here, making what amounts to a history lesson feel exciting.

I also feel the need to mention that the way the vampire’s code is laid out, the way they’ve split themselves into different houses, all felt very familiar to me as a former player of White Wolf’s old Vampire: The Masquerade roleplaying game. The biggest difference, though, is that Kozeniewski presents lore done the right way, and not something that becomes bogged down on itself after a while. Still, I think I’ll be very surprised if I discover he wasn’t influenced by that old game, at least in some small way.

Overall, Hunter of the Dead is one of those books that delivers on every front. While the ending had me swearing out loud, it does seem to promise more from these characters, and more for this world. At least I seriously hope so!  I, for one,  cannot wait for the chance to lose myself again in the world Kozeniewski has created sometime soon. 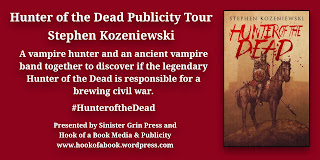 Someone has begun targeting vampires.

Vampire leaders of the thirteen Houses attribute the string of recent losses to over-zealous vampire hunters. Only Cicatrice, the most ancient and powerful vampire in the world, suspects that the semi-legendary Hunter of the Dead may be the real culprit.

Carter Price, a vampire hunter who despises the way his profession is becoming centralized and corporatized, begins to suspect the Hunter of the Dead is back, too – and no longer distinguishing between vampires and mortals. Against his better judgment, Price agrees to work with Cicatrice.

The uneasy allies attempt to uncover the truth about the Hunter, while a vampire civil war brews in the background. But perhaps most difficult of all, they must contend with their new apprentices, who seem to be falling in love with each other against every rule of man and monster… 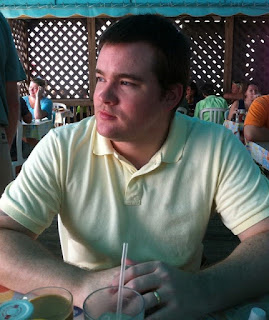 Stephen Kozeniewski (pronounced "causin' ooze key") lives in Pennsylvania, the birthplace of the modern zombie. During his time as a Field Artillery officer, he served for three years in Oklahoma and one in Iraq, where due to what he assumes was a clerical error, he was awarded the Bronze Star. He is also a classically trained linguist, which sounds much more impressive than saying his bachelor's degree is in German.

"I have never enjoyed a writer's writing as much as I have with Stephen Kozeniewski. I cannot wait to get my hands on HUNTER OF THE DEAD!"
- Phillip Tomasso, author of the VACCINATION series

"Kozeniewski is a rich voice that booms over his peers. I am coming to think of him as the closest thing to the reincarnation or spiritual successor of Ray Bradbury."
- David Sharp, Horror Underground (now Cinema Bluster)

"Kozeniewski never fails to entertain with his bizarre and cavernous stories."
- K.P. Ambroziak, author of A PERPETUAL MIMICRY

"I don't know how he does it, but every one of Kozeniewski's books offers something totally unique and compelling to the reader."
- Sharon Stevenson, author of the RAISED and GALLOWS series

"As many people know by now, I am a fan of Kozeniewski, maybe even a bit of a fangirl...It doesn't matter to me what he is writing, I will read it."
- Sheilah Randall, Cellar Door Book Reviews

"I'm not usually a standalone novelist sort of fellow but a friend of mine asked me who I thought was the best standalone novelist I read in independent fiction...after a long time, I decided the answer was Stephen Kozeniewski."
- C.T. Phipps, author of the SUPERVILLAINY SAGA

"What I love most about Kozy's work is that they're unique...It's something fresh and new every time."
- Shawn Remfrey, Literary Litter

Find Hunter of the Dead and more great horror titles for any taste at the Sinister Grin Press site. Horror That’ll Carve a Smile on Your Face!
Also available in paperback!

If you are a member of the media or a blogger that wishes to review Hunter of the Dead, or feature Stephen, contact Erin Al-Mehairi, publicity and marketing, Sinister Grin Press, at hookofabook(at)hotmail(dot)com.
Posted by John Quick at 12:06 AM