Move Over Punisher: A Review of Stone Work by Dominic Stabile

I actually finished this one over a week ago, but life has kept me busy so I didn't get the chance to sit down and write this until just now. Without further ado, here's my review of Dominic Stabile's Stone Work. 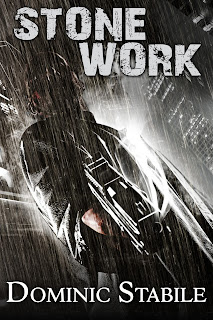 I hadn’t heard of Dominic Stabile before, but the premise behind Stone Work was intriguing, so I decided to give it a shot. I can definitely say it was worth the chance.

City is, well, any big city you can think of, only in a future where the country’s gone to hell in a hand basket, and violence reigns supreme. After escaping from his confinement at The Wall, our anti-hero, Stone, sets off to make a living as a soldier of fortune. Along with his technophile assistant Megan, he takes any job that pays, be it thieving, killing, or anything between the two.

For folks like me who grew up reading about the Punisher or Judge Dredd, Stone feels familiar enough that we can root for him despite his unlikable demeanor, but is still original enough to feel fresh. By his own admission, he’s not that smart, but he’s got cunning for days, and that’s usually enough to get him through whatever situation he finds himself in.

When it’s not enough, he isn’t afraid to call on Megan for help. She is definitely the brains of the pair, and the relationship between the two is actually fun and complex. I have to wonder what circumstances transpired to bring them together, since in many ways they are polar opposites of one another. Where Stone is a hard man, Megan has compassion. Stone kills without mercy, Megan will only kill if there’s no other option. Not to say that she’s not every bit the bad-ass Stone is; she just manages it in a different way. That they have what feels like an at-times grudging friendship was a wonderful thing, too. It’s way too easy to have some kind of unrequited love between two characters like this, and that Stabile didn’t go that route—at least not that I picked up on—was a breath of fresh air.

The book itself is actually a collection of three novella-length stories. While they are obviously chronological, don’t require you to be aware of the previous events to enjoy them. I kept expecting that I’d run across one that didn’t feel as strong as the others, but thankfully that never happened. I enjoyed all three equally, and the format actually made a perfect introduction to the characters and the world, since nothing went on overlong, nor did it get bogged down in exposition. It’s been a while since I’ve seen such a textbook example of showing instead of telling, and it made everything clip along nicely.

And while elements of the stories are similar, they’ve got enough variety that they stand on their own nicely. ‘Roid Rage is a bizzaro take on zombies with a nice amount of gross-out horror to keep it moving. Plumb Inc feels like Lovecraft mixed with Blade Runner. And Godless City is pure dystopian adventure, throwing a bit of everything into the mix for a stew that’s absolutely glorious.

Of all the elements Stabile has woven together, it’s his particular take on religion in this blasted-out new world that stuck with me the most. Without giving too much away, it’s something I could see happening in the real world, a well-thought-out extrapolation of some of the country’s less intelligent tendencies, thanks to our culture’s current obsessions. And honestly, thought of in that light, it becomes perhaps the most frightening aspect of the entire collection.

Stone Work was a fast read, and left me craving more of these characters. I hear he’s got more coming from Stone and Megan soon, and I for one, cannot wait to see what’s next for them!

Grab your copy of Stone Work from Amazon here. 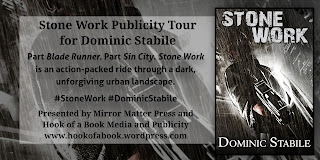 Follow along the tour with the hashtags: #StoneWork #finalwar #wasteland
Synopsis for Stone Work
City stands in the irradiated dunes of America, nearly two centuries after the Final War. The wall surrounding it is a buffer for the wasteland inhabitants who covet entrance, and a trap for the citizens smothering in its polluted air and drowning in its blood-filled streets.
Stone is a criminal for hire. Robbed of his loved ones and scarred almost beyond recognition, he navigates City’s darkest corners, doing some of its darkest deeds. In this collection, he'll pursue an elusive thief, bent on raising an army of juiced up mutants. He'll break into the office building of a mysterious corporation, only to find the executives are less into sending faxes and more into performing hexes.
In the final chapter, he'll track a man through the Alleys of South City with the help of his tech savvy partner, Megan, and together they'll face the sentient darkness of City's deepest underbelly, and confront the violent potential of City's most dangerous cults.
Part Blade Runner. Part Sin City. Stone Work is an action-packed ride through the rain-slicked streets of a dark, unforgiving urban landscape, rife with sadistic criminals, inter-dimensional abominations, and a creeping darkness that seeks to erase the last, now almost mythical traces of human goodness left in a world always teetering over the edge of its own extinction.
Biography 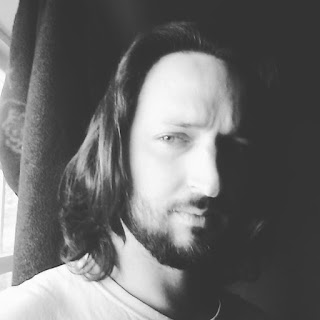 Dominic Stabile's short fiction has appeared in Fossil Lake III: Unicornado!, Sanitarium Magazine, The Horror Zine, Atticus Review, Far Horizons, and has been adapted as a radio play by Manor House Productions. He has held jobs as a warehouse worker, cashier, bookstore associate, textbook manager, and carpenter. He’s a born southerner, transplanted to Penobscot, Maine by a desperate desire to escape retail work. When not writing or reading, he enjoys horror, sci-fi, and noir films, westerns, and bourbon.
Read his blogs on all things horror at dominicstabile.com.
Praise for Dominic Stabile
"With Whiskey for Breakfast, Dominic Stabile provides a page turning mystery that kept me guessing as to who the real killers might be." - Brenda Casto, Readersfavorite.com
Purchase Links
Amazon US
Watch for more links to come!
Want to Feature Dominic Stabile?

If you would like a copy of the book for review or to conduct an interview with Dominic Stabile, please contact Erin Al-Mehairi, Marketing and Publicity at Mirror Matter Press and Hook of a Book Media: hookofabook@hotmail.com.