Obsession Through Time: A Review of Hexagram by Duncan Bradshaw

In an attempt to catch up on all the books I’ve agreed to review, I’ll be posting two this week. First up, Duncan Bradshaw’s  rather unique Hexagram. 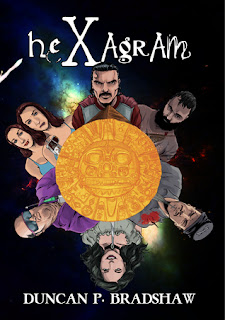 When I got this one, I was told to take my time so I could see exactly what Bradshaw was attempting to do here, and I have to admit that was good advice. This is not a book you just want to blast through as quick as you can; it’s one you’ll want to savor instead.

The basic premise is that the ancient Inca believed we are all made of stardust, and if they harvest enough, they can call down their God to save them from the Conquistadors and make the world a better place. When the ritual is interrupted, though, the belief turns to obsession that lasts throughout history until finally enough has been collected that it can be completed.

Don’t think this is just a straight horror novel. While it has elements of it, certainly, it also touches on science fiction, alternate history, and straight fantasy. This is in no way a detriment, either. Bradshaw weaves these things together into a story (or should I say, series of stories) that are compelling and powerful in their own right.

I particularly enjoyed the way he interspersed real-world events such as Jack the Ripper and Jonestown into the story, giving a method to the madness of those who actually committed those atrocities. While I seriously doubt the Ripper or Jim Jones (who goes by a different name here) were harvesting stardust from their victims, it’s a nice thought experiment to think that maybe they did.

Also of note is the way the stories connect to one another, but are their own tales. Each even seems to have a slightly different writing style, based on the point in history they occur, the location, and the characters involved. It kept me entertained since there was always something new right around the corner, and is a testament to Bradshaw’s writing ability to flow so seamlessly between those sometimes disparate styles.

Still though, I definitely say this is a book worth reading, and in fact worth re-reading as well. I plan to, if for no other reason than so I can look back over Bradshaw’s presented history with the foreknowledge of where it’s all going to see better how it all fits together. If you’re looking for something a little different from the typical horror fare, grab Hexagram; you will not be disappointed. 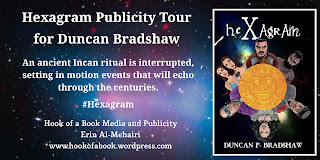 Follow along the tour with these hashtags:  #Hexagram #IncanRituals #HookofaBook

Their lands plagued by invaders, the Inca resort to an ancient ritual. By harvesting star dust from people, they hope to accumulate enough to raise the sun god, Inti, and reclaim their lands.
Yet when the collection is interrupted, it sets in motion events which will rattle human history.
Six stories. Six different time periods. One outcome.
We are all made of stars.
When an ancient Inca ritual is interrupted, it sets in motion a series of events that will echo through five hundred years of human history. Many seek to use the arcane knowledge for their own ends, from a survivor of a shipwreck, through to a suicide cult.
Yet...the most unlikeliest of them all will succeed.
Biography 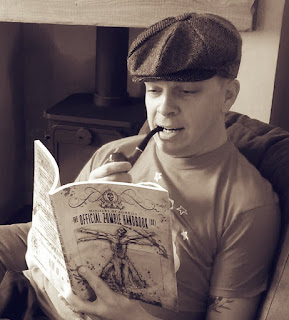 Duncan P. Bradshaw lives in the county of Wiltshire, nestled around the belly button of southern England, with his wife Debbie, and their two cats, Rafa and Pepe. During the day, he is a mild mannered office goon, doing things which would bore you, if he was forced to tell you. At night, he becomes one with a keyboard, and transforms his weird and wonderful thoughts into words, which people, like you, and me, can read.
Why not pop over to his website, http://duncanpbradshaw.co.uk/ or give him a like over on Facebook, https://www.facebook.com/duncanpbradshaw or read his ravings on his blog, http://duncanpbradshaw.blogspot.co.uk/
Praise for Hexagram
“Hexagram is a visceral journey through the dark nooks and crannies of human history. Lovecraftian terror merges with blood sacrifices, suicide cults and body horror as Bradshaw weaves an intricate plot into an epic tale of apocalyptic dread.” – Rich Hawkins, author of The Last Plague trilogy
“A rip-roaring boy’s own adventure yarn. This novel contains multitudes, and the sheer scale and breadth of the story is exhilarating. A glorious, unhinged thrill ride.” – Kit Power, author of GodBomb!
Praise for Bradshaw's Writing
“Duncan Bradshaw has a fantastic writing style. He gets you engrossed in the characters from the very outset. His mix of comedy and horror and real life are superb.” – Confessions of a Reviewer
“The true genius of Duncan P. Bradshaw is the rollercoaster ride of words and expressions.  I have never seen an author go from the depths of dark and gore to laugh out loud all within the same paragraph.” – 2 Book Lovers Reviews
“Remember, you’ve now willingly plunged yourself into the mind of Duncan Bradshaw. You’re completely at the mercy of his strange imagination and all the eccentric oddities that his curious mind can conjure up.” – DLS Reviews
“Bradshaw is able to weight the horror set pieces with a dry humour and plenty of laugh out loud moments.” – UK Horror Scene
“One of the first things that I did after reading The Black Room Manuscripts, was to go out and buy Class Three by Duncan Bradshaw. I just found his writing in Time for Tea to have this gleeful kind of undertow to the carnage he wrought on his tea drinkers and wanted to see what his writing was like in a longer format.” – Ginger Nuts of Horror
Purchase Links
Amazon
Barnes & Noble
Sinister Horror Company Website
Want to Feature Duncan Bradshaw?
If you’re a member of the media or a blogger and you’d like to feature Duncan Bradshaw or Hexagram, then please contact Erin Al-Mehairi, publicist, at hookofabook@hotmail.com